On the Bullet Train with the Wheelchair

So after two fantastic nights in Kyoto, we needed to go to Tokyo and of coarse we wanted to go by Bullet Train.  Di, our fantastic Travel Agent from FlightCentre Booval, had investigated it and found that buying the tickets cost a lot more from overseas.  She suggested that we buy them in Kyoto.  Our hotel had a free shuttle service to the Train Station, so as Sully needed some down time, Sharon, Bruce and I went to investigate.  We easily found the Information Area.  They had a couple of volunteers who could speak English and who explained exactly where we needed to go to buy the ticket.  There were plenty of options to pick from and we chose the one leaving around 11.  It cost just under $300 for each couple, where as it was close to $300 per person if purchased outside the country. While we were buying the tickets, the lady from the Information Area came in and asked us to come back to her once we had purchased the tickets, to organize getting on the train the next day.  This we did and the station staff took copious notes about the time, type of wheelchair and anything else we may need.  They asked us to come back to them the following day and we would be directed from there.
However the following day, none of the staff from the previous day were there, and all we were told was where to get onto the train.  This did cause some worry, as the doors did not look wide enough to accommodate the wheelchair and none of the staff seemed to know what was happening, or indeed speak English.  However five minutes before the train was due to arrive, a gentleman arrived with a book, asked Sully if that was his name and then motioned that he would be helping him onto the train.  It all went like clockwork, except that Sully was taken in the door of the train and then we all had to get our luggage to the back of the carriage, and Sully had to work his way down the train to his seat.  There was just enough room for the wheelchair, however there was plenty of room between the seats and Sully managed to dismantle the chair and Sharon and I had a wheel each, and Sully had the main part of the wheelchair on his lap. And then an hour into the journey - it took just over 2 hours in total - a conductor turned up to advise that someone would help Sully get off the train.  And sure enough, someone arrived to help him out the door at the right station.
All in all, it went very well.  However, a little more information at the time of boarding would have worked a little better - I believe at one stage I may have said 'as long as you are in Tokyo by the time the plane leaves, I don't care how you get there" or words like that, as we were both getting a bit hot under the collar about how he was going to get on the train.
At the Tokyo end, we caught a taxi to the Hotel.  We ended up with two taxis, as the luggage we had accumulated along with the wheelchair made it a little less squeezy in the cab. 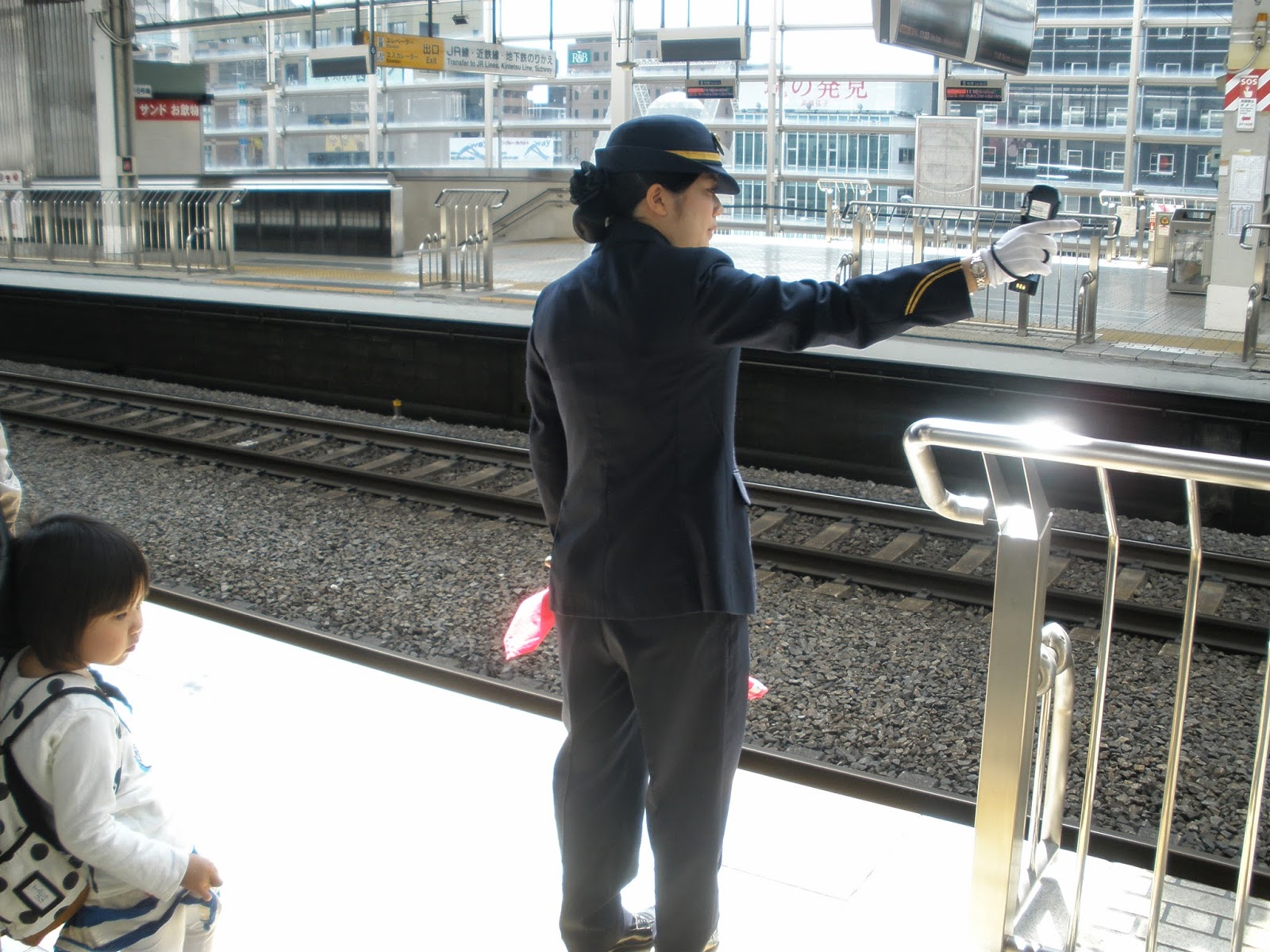 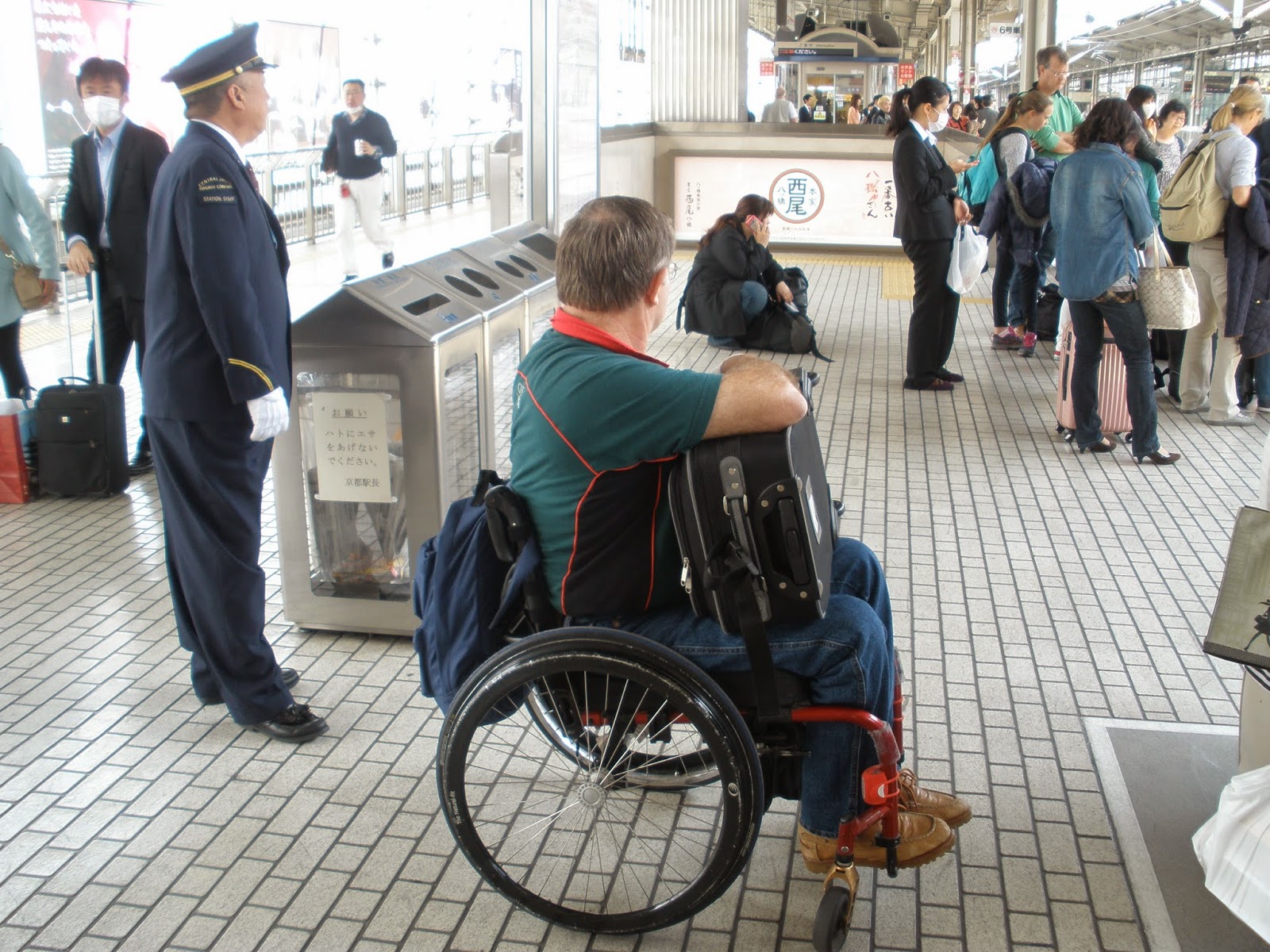 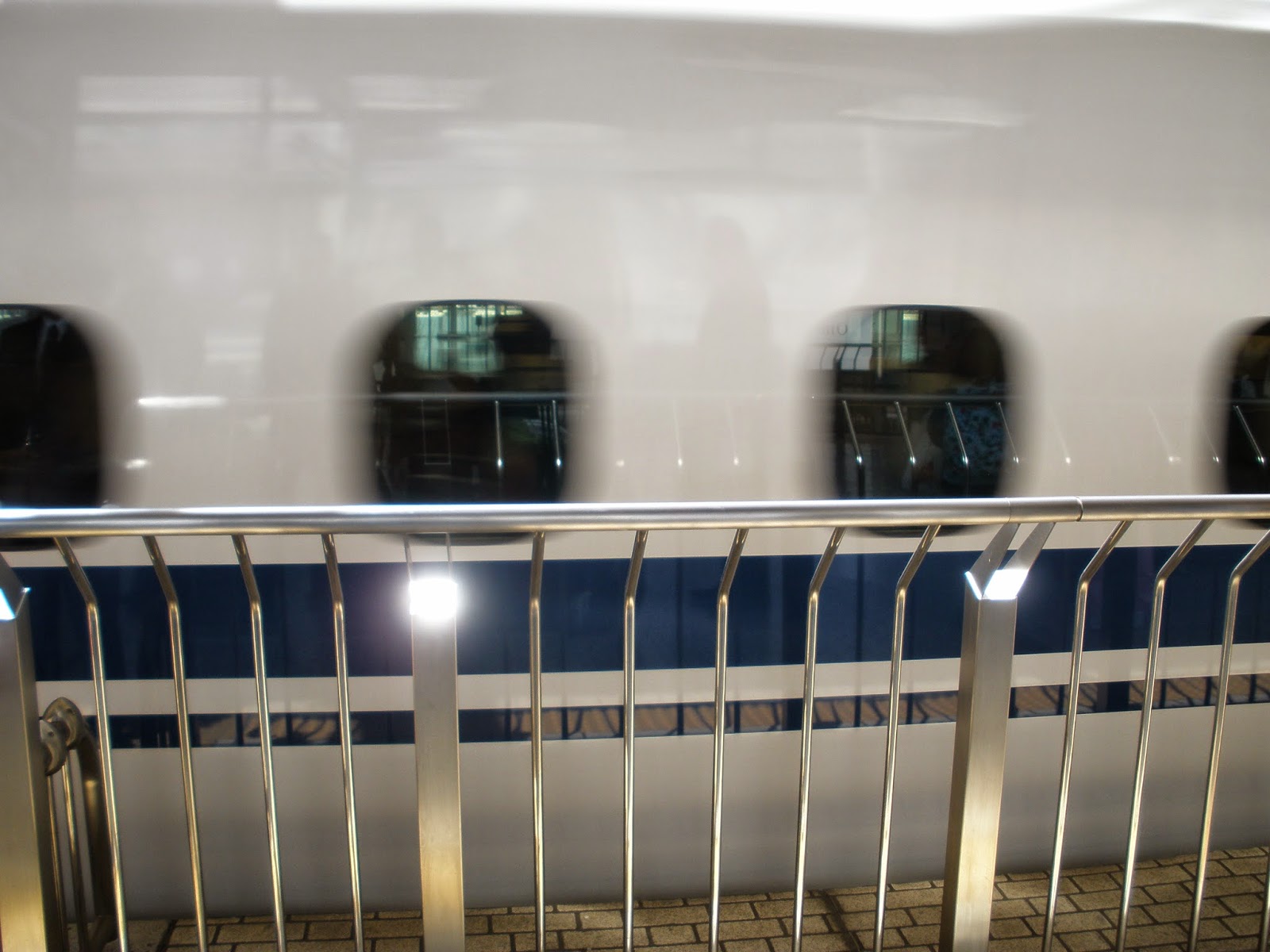 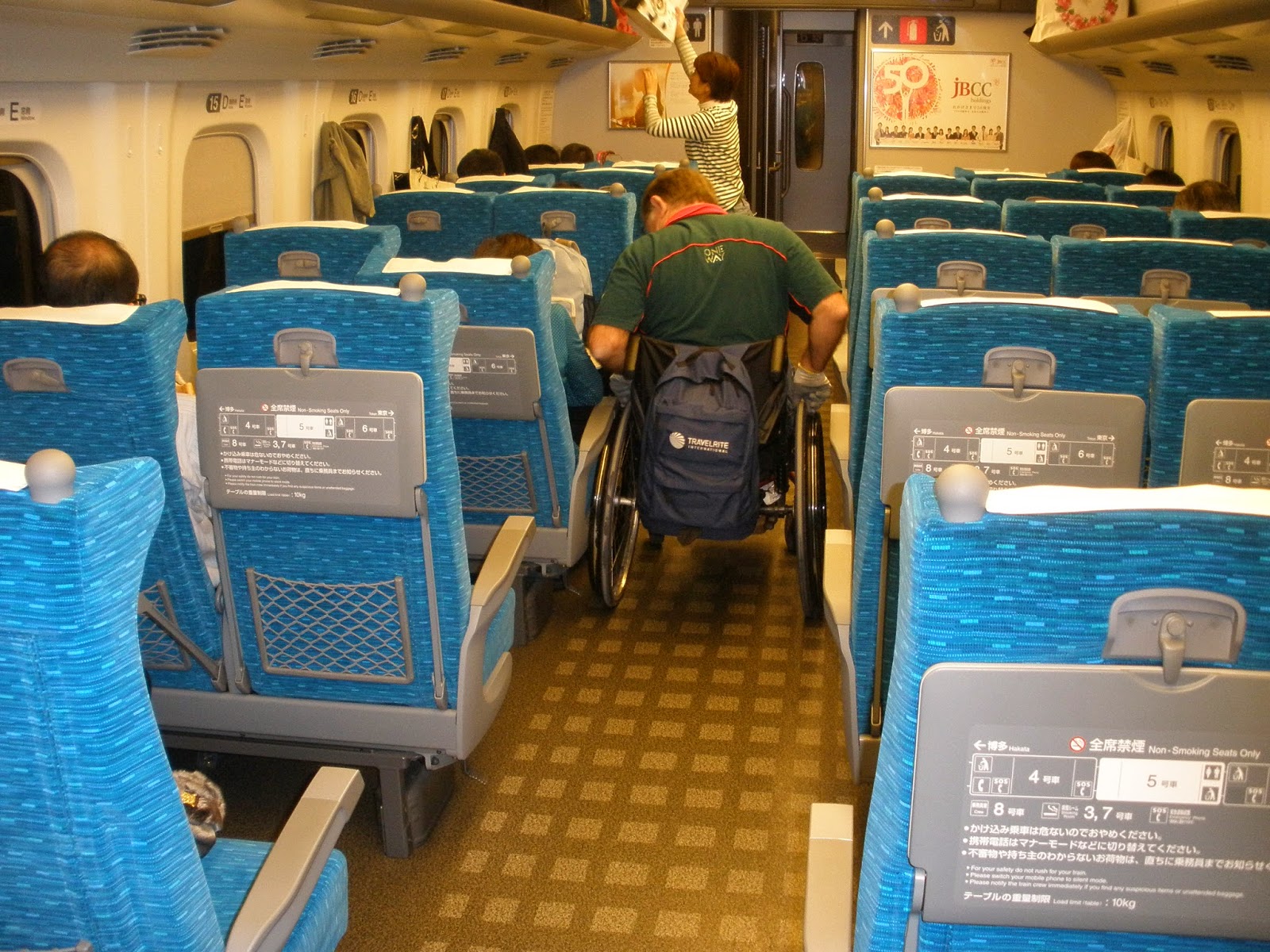 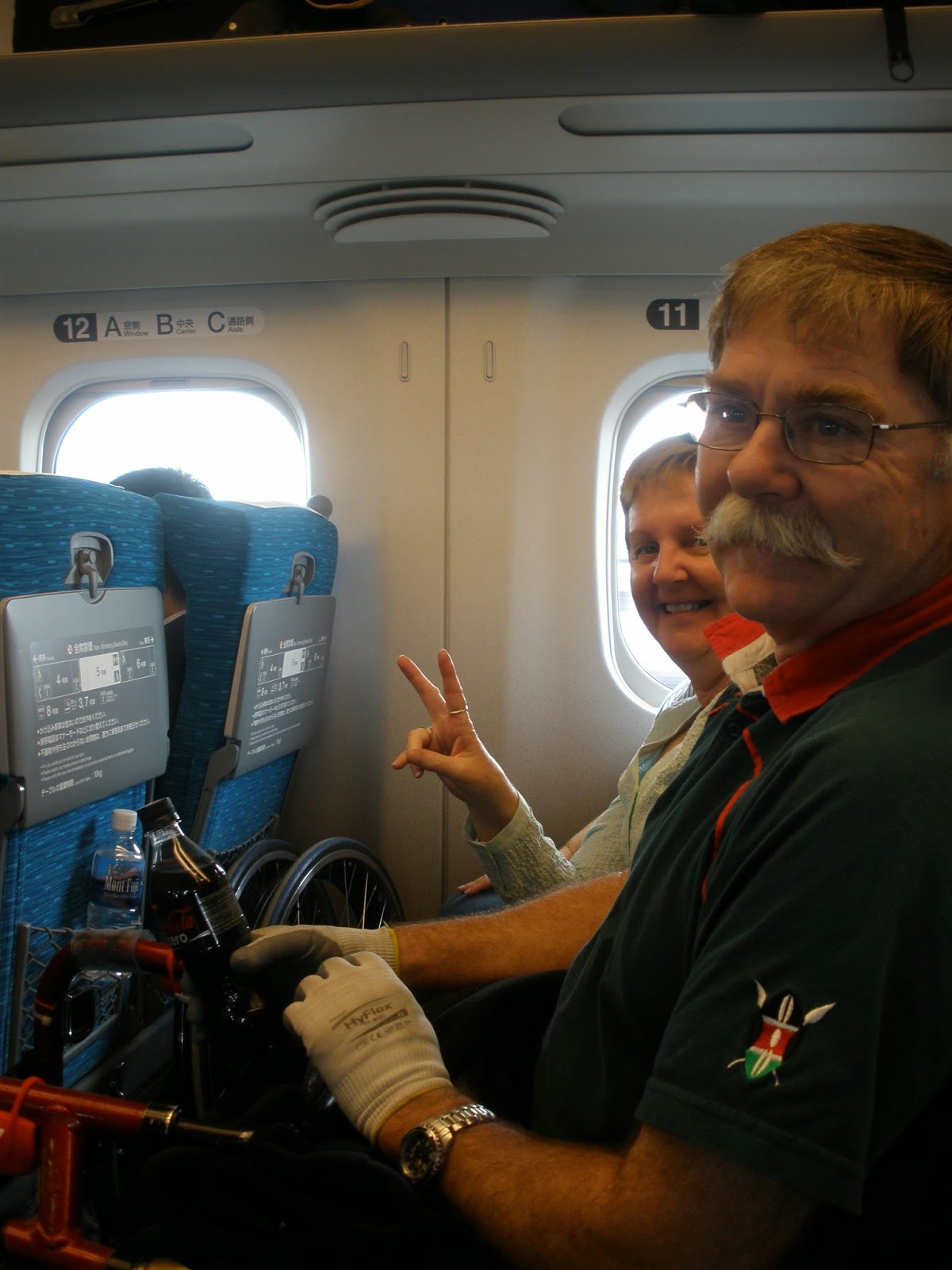